Leaving is always difficult….or not at all? Just close the door…

An unexpected night party in the garden with some complete strangers, gave us a headache on our first day in the unknown. Our stuff was not fully packed, some small details still needed to be done on the bikes… It was a fun night and one of the things we should be open for like new people and new stories, but still… we were not 100% ready! But the plan was there and with a two hours delay and we took off. Our two closest neighbours were there with us for the whole morning to see us ride out of the house. And then we felt the wind in our faces, on the way from Belgium to Poland. We are free! 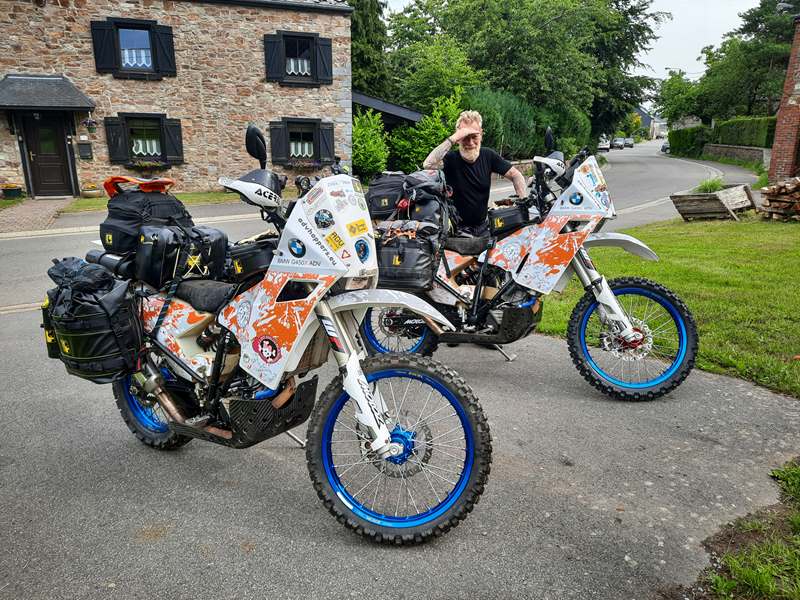 Goodbyes are not farewells

The plan was to visit some friends and family in Belgium and Germany, and make our way to Poland for some last medical checkups and time with Agata’s family. To start with, we visited the family of Joris and then in the late afternoon showed up at the house of his closest friend, Rinnie. And there were other friends there, too. All of them carved out some time on Sunday afternoon to spend it with us. That literally melted our hearts. Strange to say, even Joris had tears in his eyes saying goodbye to his friends. A long term plan does something with a person, all kinds of strange thoughts play in your head. 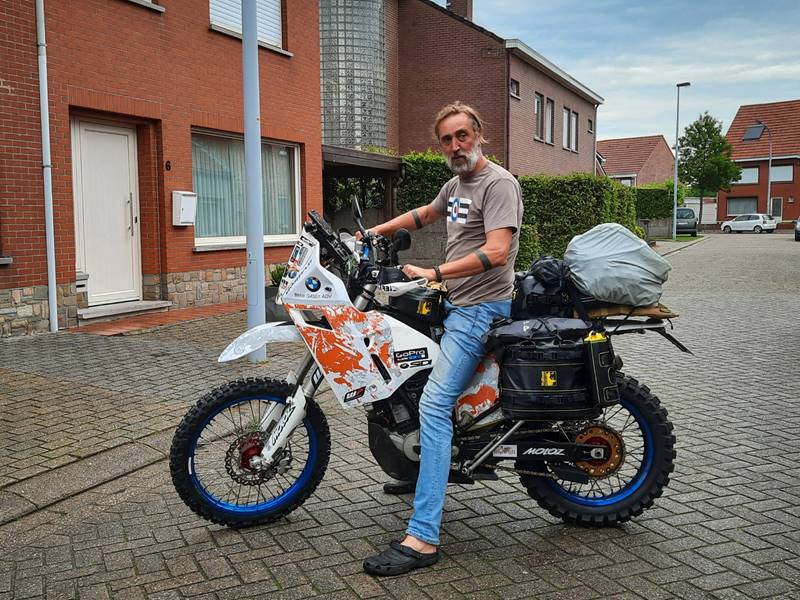 The next morning the GPS decided to take the “sentimental” tour through places Joris knew, lived or worked in and led us  to the Netherlands, as we wanted to fix a couple of small issues with our bikes at the place they were built. This was just partially successful – Draka’s leakage was fixed, but Drako’s sluggish starting was not. Anyway, we had no other choice but to continue the ride. And it was a great feeling when Joris shouted through the intercom “WE ARE FREE!!!” 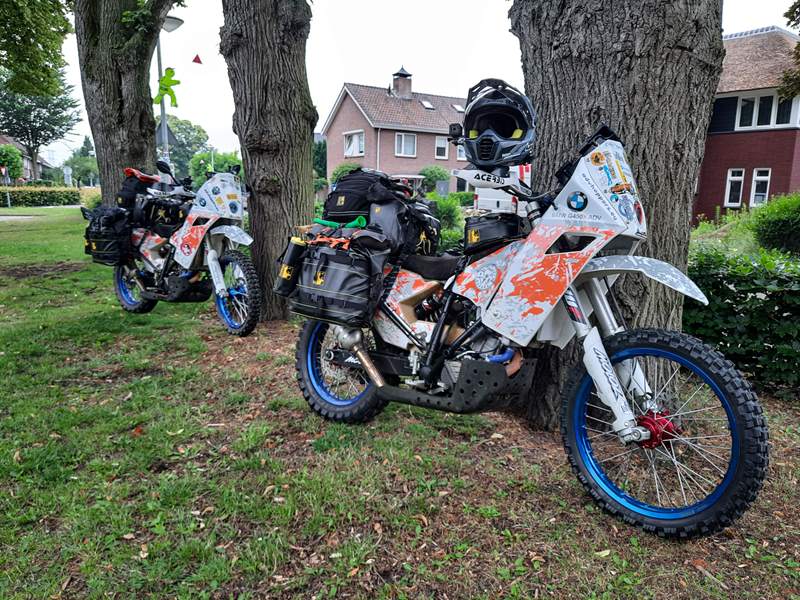 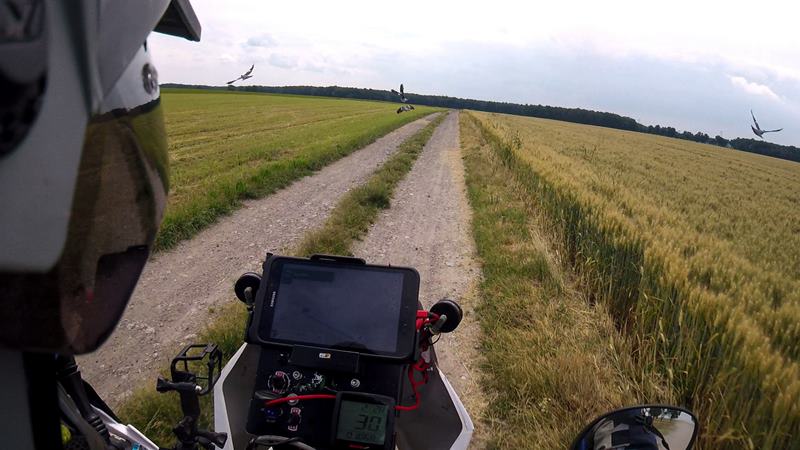 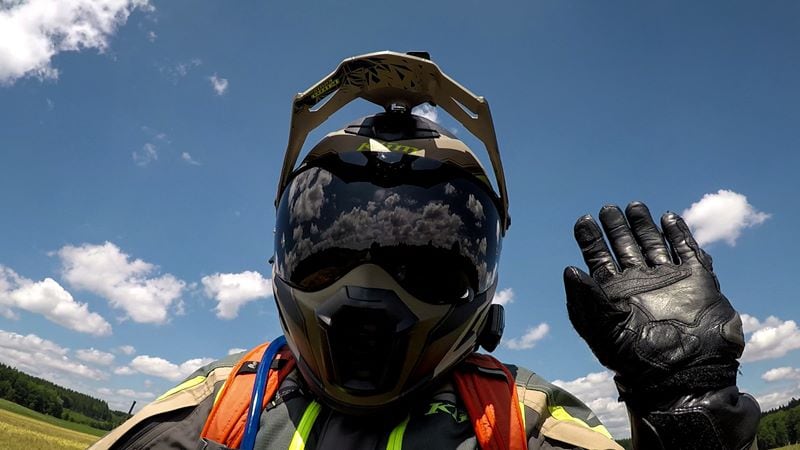 On our way we visited more friends – Myk, the one that brought Agata and Joris together (we couldn’t have left without seeing him!!!) and Agata’s schoolmate who now lives in Germany (as in past 10 years or so there was no opportunity to do that). All visits where so great, we felt welcome everywhere, were treated as kings, which was a wonderful feeling to start the trip with. 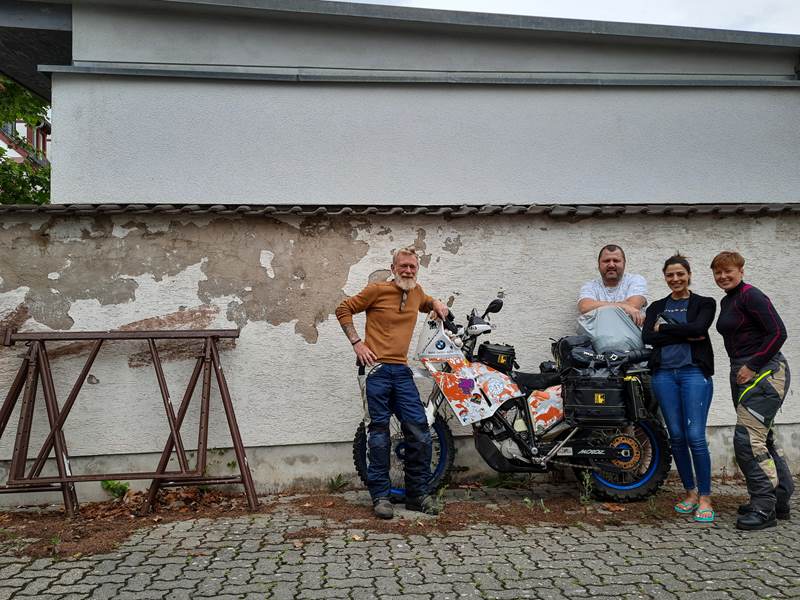 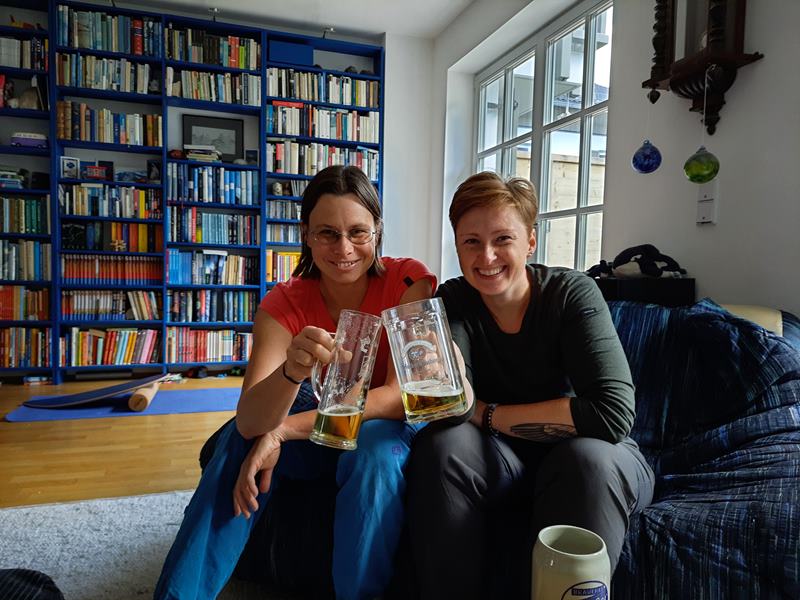 It’s been a while since we’ve been in the saddles. Last year was not too good in terms of riding due to travelling restrictions and working full time did not make it easy to just hop on the bikes in the afternoons. Our 450’s needed some works on them and we did not even have enough time to fully test them before we left. It’s a bit like during university times, when you needed to study for an exam – there was always not enough time and usually “one day was missing”. We felt it well on the evening prior to the departure: our bikes decals were printed wrongly on one side and as we had the correct stickers available we decided to affix them on the fairing. Very bad idea, when you do not have skills and equipment to apply irregularly shaped decals on the bike’s plastics. This resulted in a lot of tension, cursing, miscommunication and bad fluids. Additional beers, especially when the supply dried out did not help either. As a result, the stickers presented themselves way worse than with a small printing error. Or did not present at all, when one was torn and cut in half in a moment of helplessness. We went to sleep only around 3:00 and the planned start in the morning got delayed. Because of this rush, pressure and tiredness we later discovered we were missing some things we wanted to pack as the very last items.

We also got a bit out of practice with setting and breaking up the camp. To add to that, we were still adjusting the way of packing our bags and mounting them on the bikes and we still felt there is room for improvement. On the other hand we knew we need to implement some routines in our days, to ensure everything goes smoothly. Cleaning up visors in our helmets, charging the electronic devices, stretching before and after the ride (that still needs to become more of a habit, as was neglected). We also tried to end the day around 16:00, to have enough time to set up the camp, inspect the motorbikes, cook the dinner and enjoy the evening.

During our first stage we had a mixture of accommodation: slept at our friends’ places, camped wild or on official campsites. We also stayed one night in a hotel, as the heavy rainfall made it almost impossible to camp. 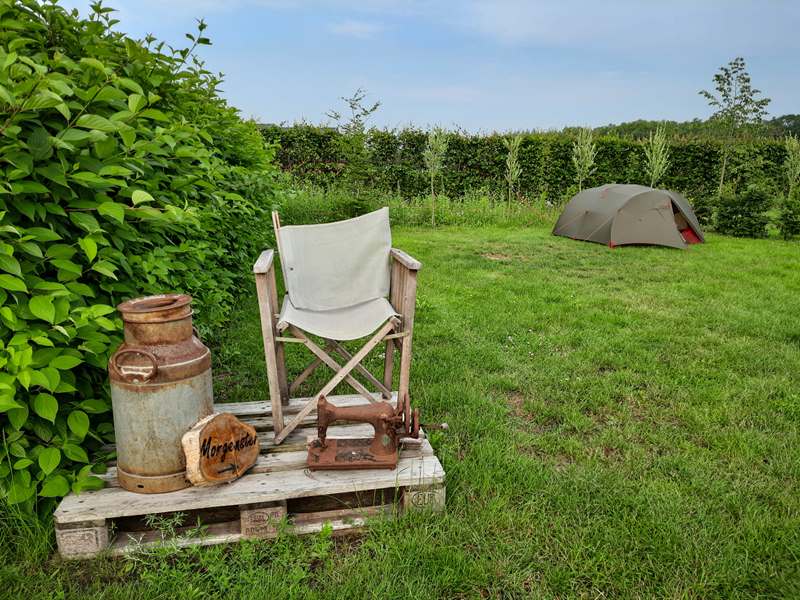 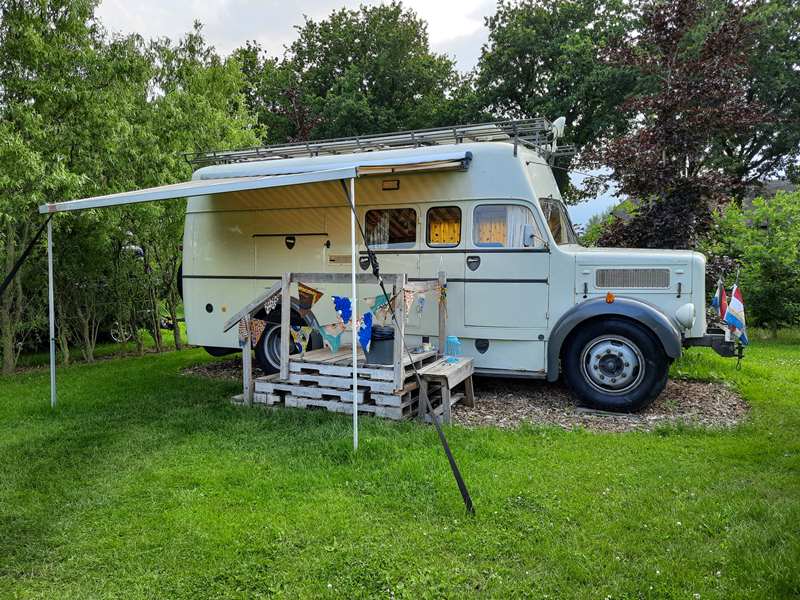 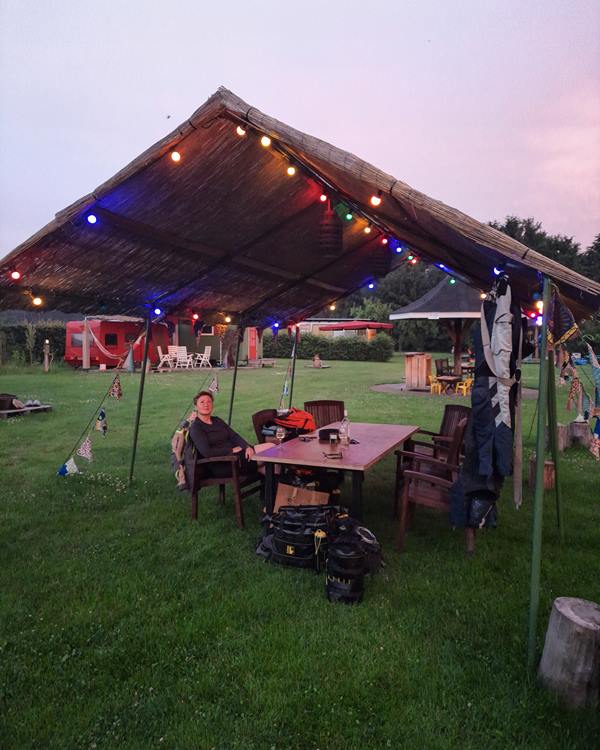 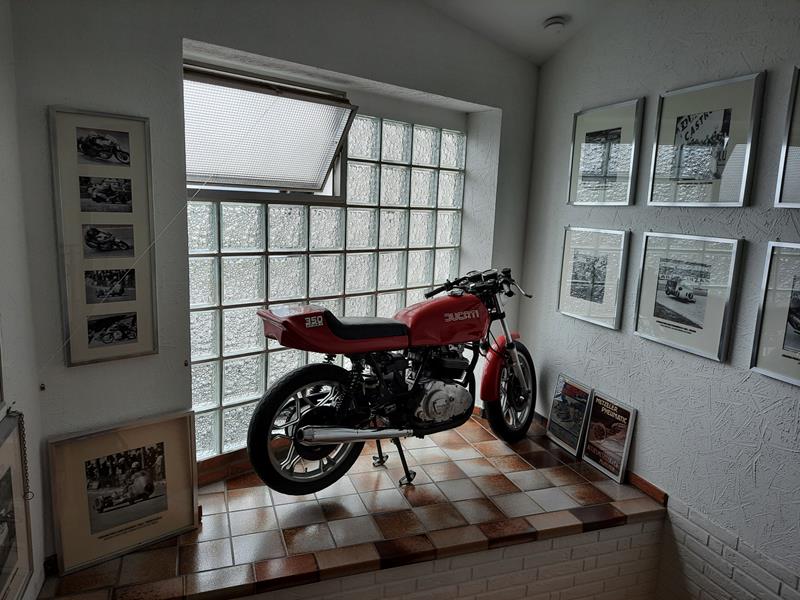 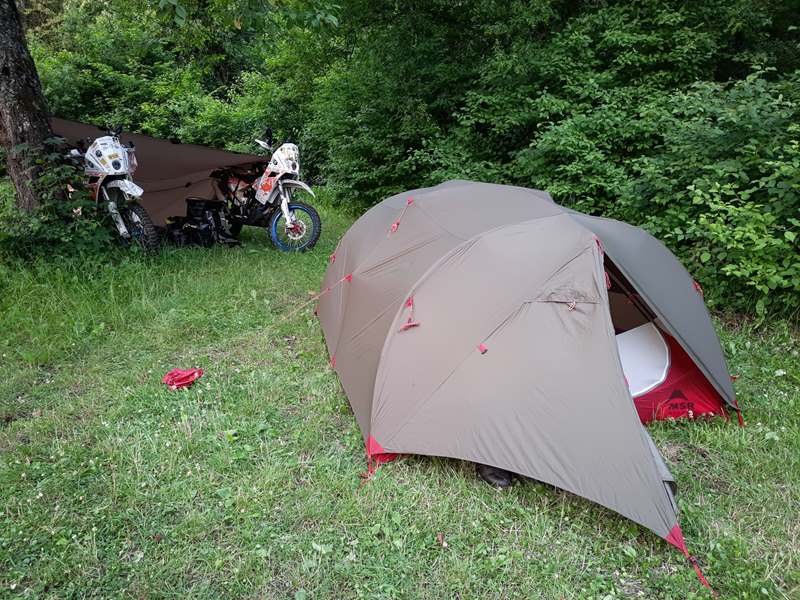 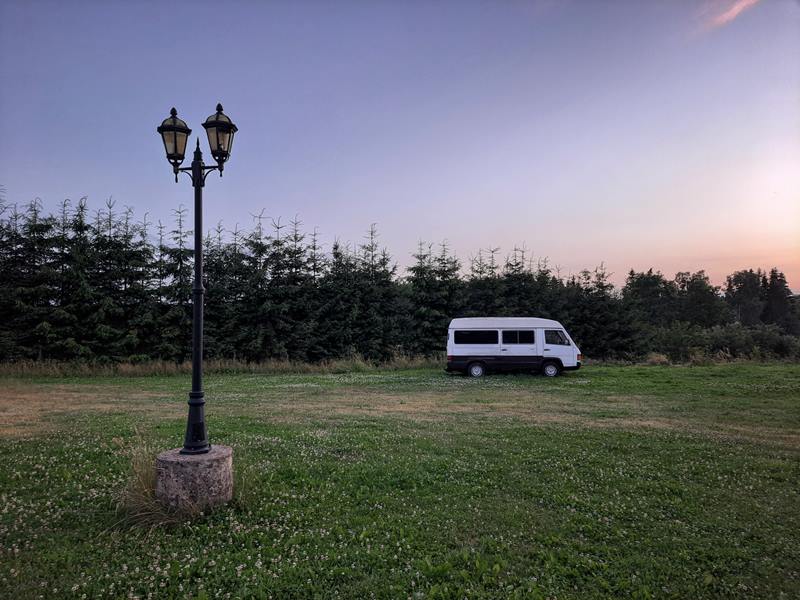 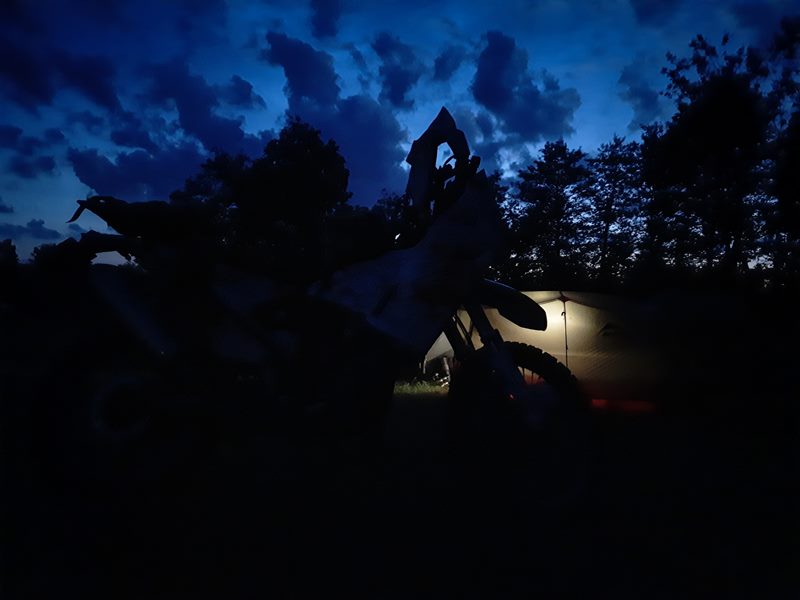 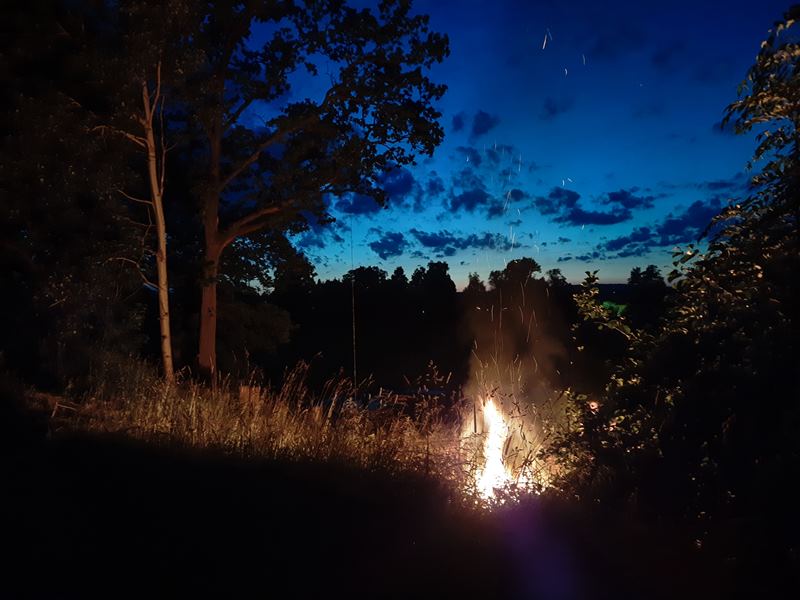 We’ve often heard that we are going for long holidays. No. This is far from that. You are out of the comfort zone, limited to what you carry with you on a motorbike, not sure what and when you’re going to eat and where you are going to stay for the night. You are on a tight budget, knowing, that the petrol cost is the highest chunk of the money you spend. You are exposed to all the elements: heat, wind, rainstorms. If your bike stops in the middle of the road because the brakes stalled the rear wheel and you can’t really move it to the side of the road until all cools down and the wheel is turning again, you hear a lot of horns, angry words and see a lot of middle fingers.

On the other hand, we’ve experienced stunning views of the German Wine Route, cute and tiny roads between the fields in the middle of nowhere, heavy smell of night scented stock, deafening chirping of the birds and burbling of the streams on our camping spots as well as great hospitality of our friends mentioned earlier. Those things easily compensated for any struggles. 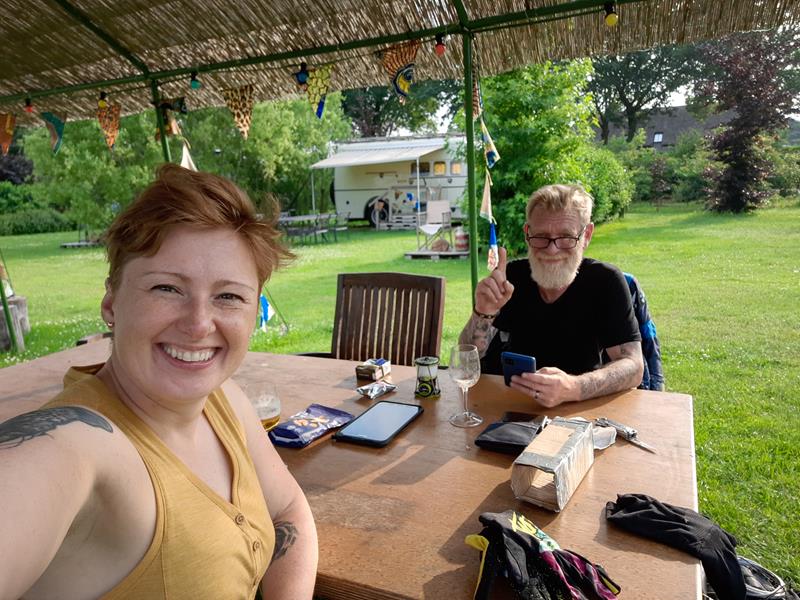 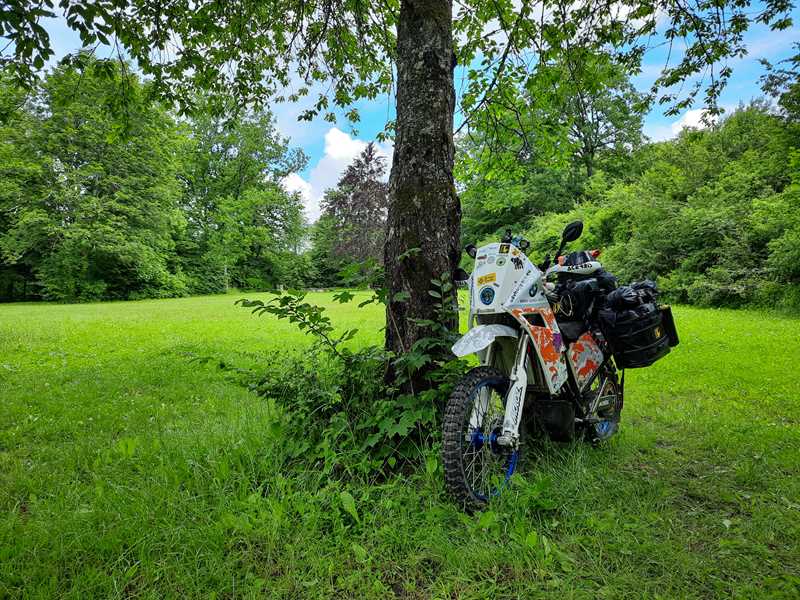 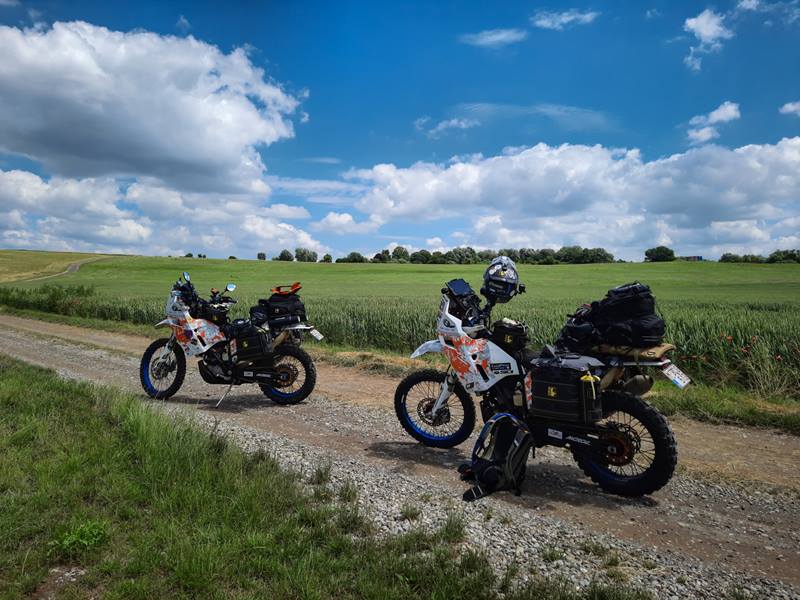 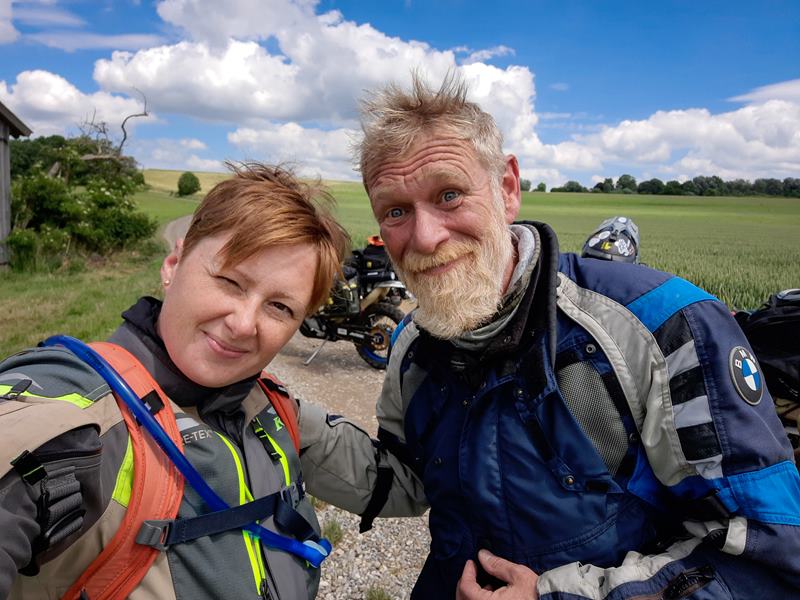 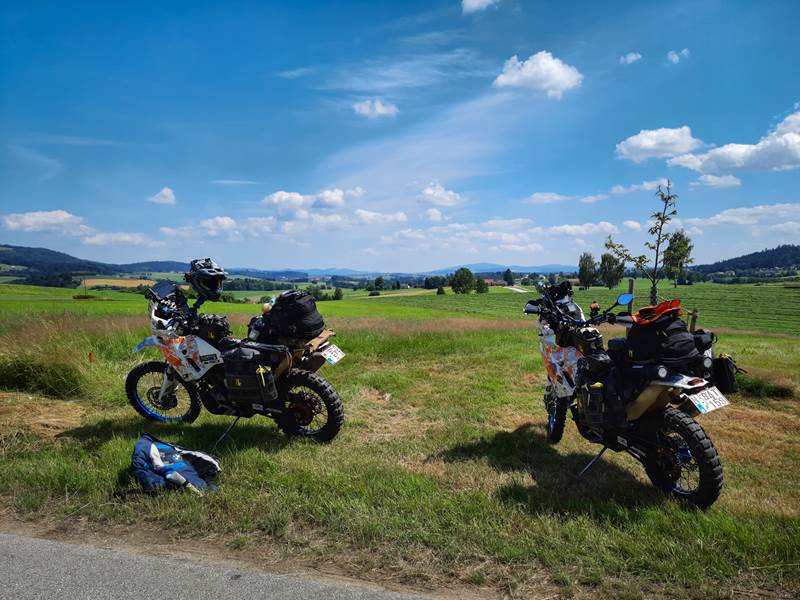 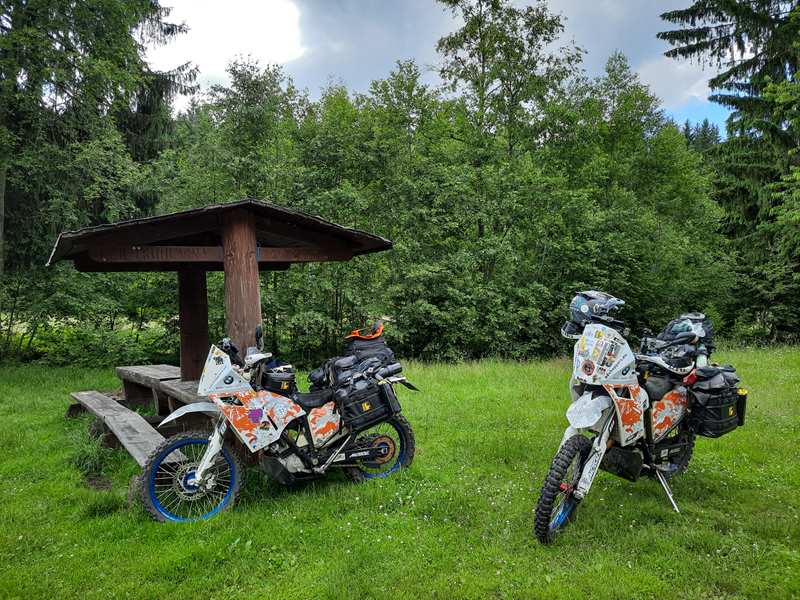 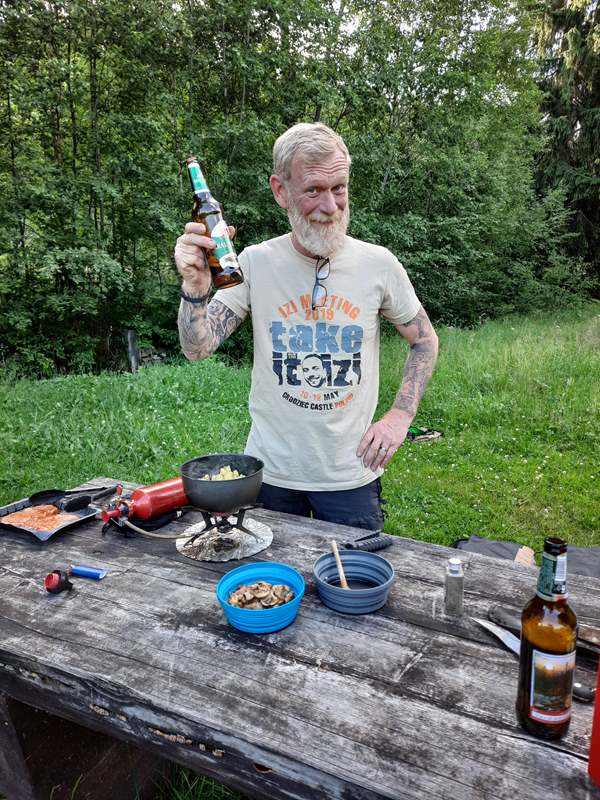 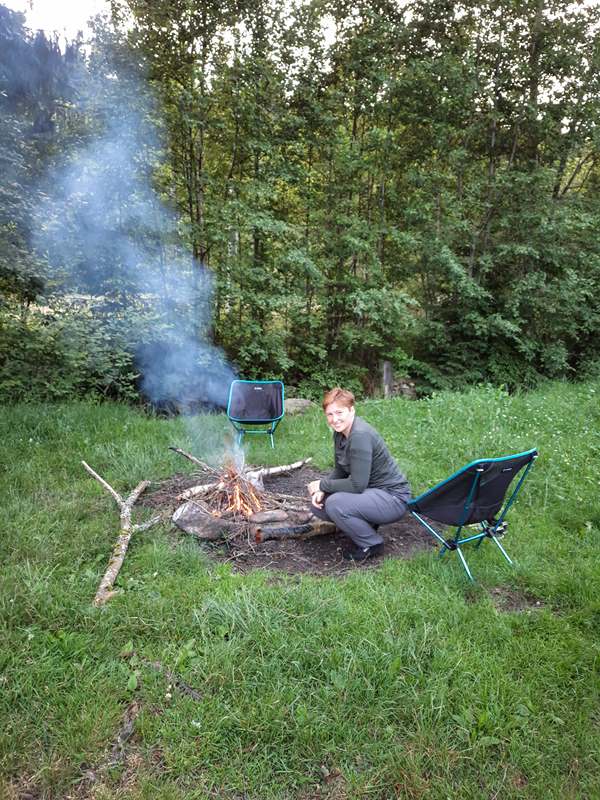 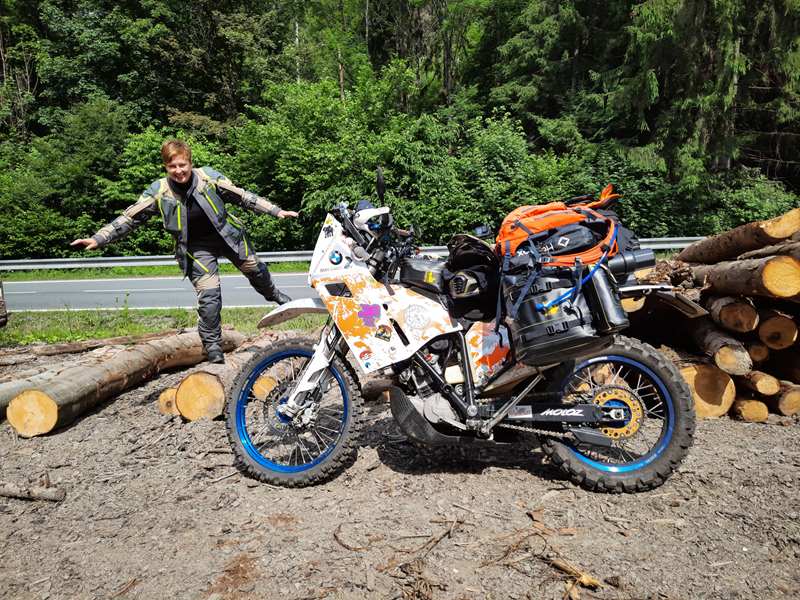 As we needed to be in Poland for some appointments and at the same time visit the friends on the way , we didn’t have any time to spare, so we took mostly secondary roads, doing between 200 and 300 km’s a day. Nice views, beautiful villages, but bit too asphaltic… We learned that being in a hurry or tight on schedule are the things to be banned out of our plan as they give stress, frustration and no fun. This was a bit too much. Too intense.. We felt the time pressure and therefore could not take the time to rest and fully enjoy the trip. We packed too much into the schedule and, with the inevitable “attractions” like minor breakdowns (ours or when we helped other bikers on their roadside repairs), increased time to fill the tanks due to unpacking part of the luggage and using the sock fuel filters, the expected result was a mixture of tiredness, frustration and being short fused. For the future we really need to factor in the time to rest, the time to work on the bikes, as they need more attention than any modern adventure bike.

We had some minor tech issues on the way, but all were possible to be resolved at the side of the road. However last 100 km Joris had to ride alone, as Agata’s bike gave up and had to be towed on a trailer. Luckily we could count on a old famous friend from Agata, White Wolf – Marco, to assist us. The issue turned out be an electrical problem that grew up slowly, from the lethargic starting to not starting at all, and Joris trying to figure out the problem messed up the electronic steering. The bike was given to a magician mechanic to reprogram the necessary software and thoroughly inspect the wiring, that surprised us with some unconventional solutions and most probably caused some short circuits.

We are a bit stuck in Poland now, with minor stuff to do we try to fill our days without our dragons, or at least the one that is missing. Polish section of TET, that we planned to ride “in the meantime” is calling, but we need to be patient. 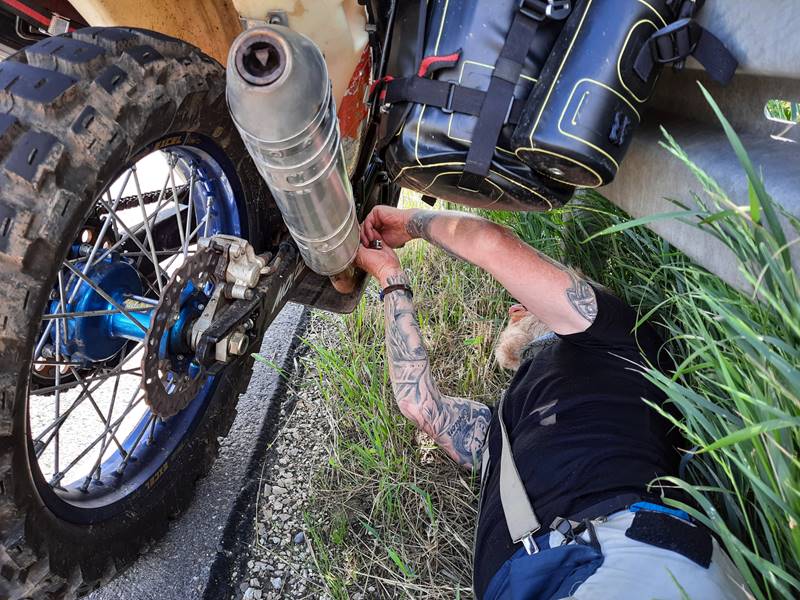 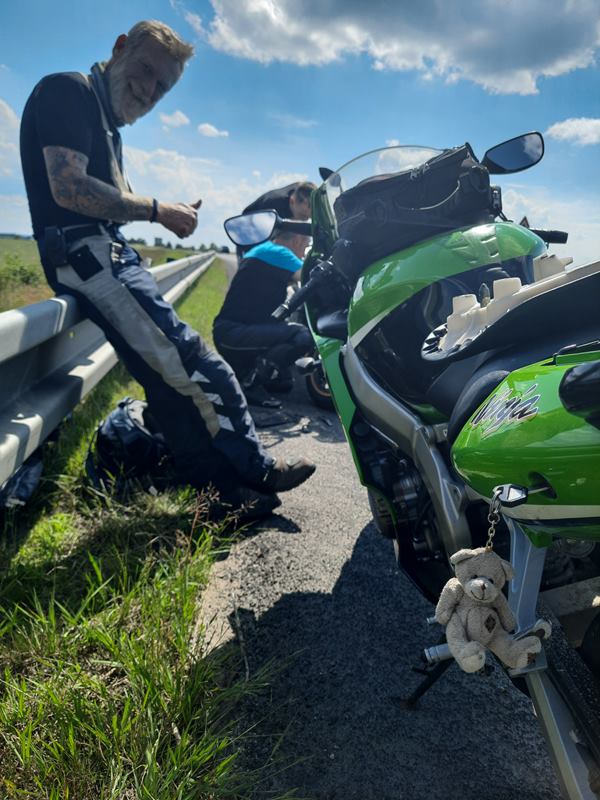 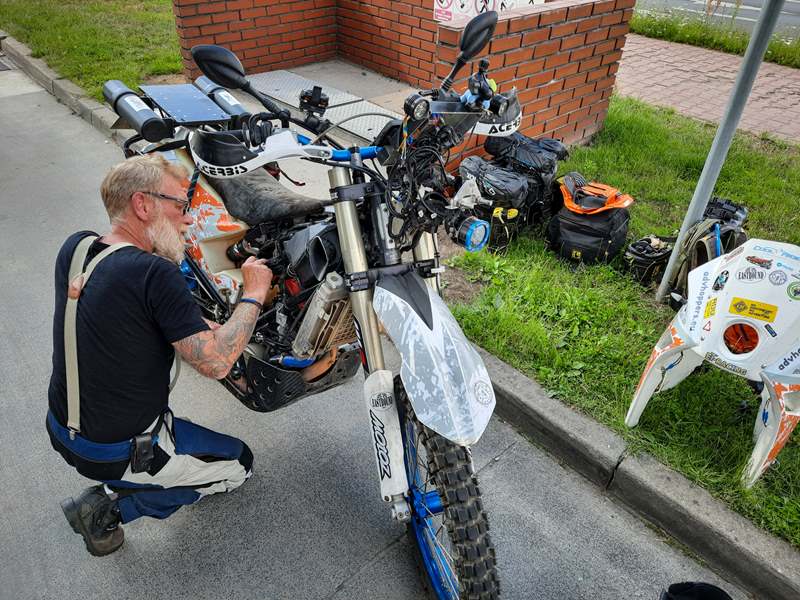 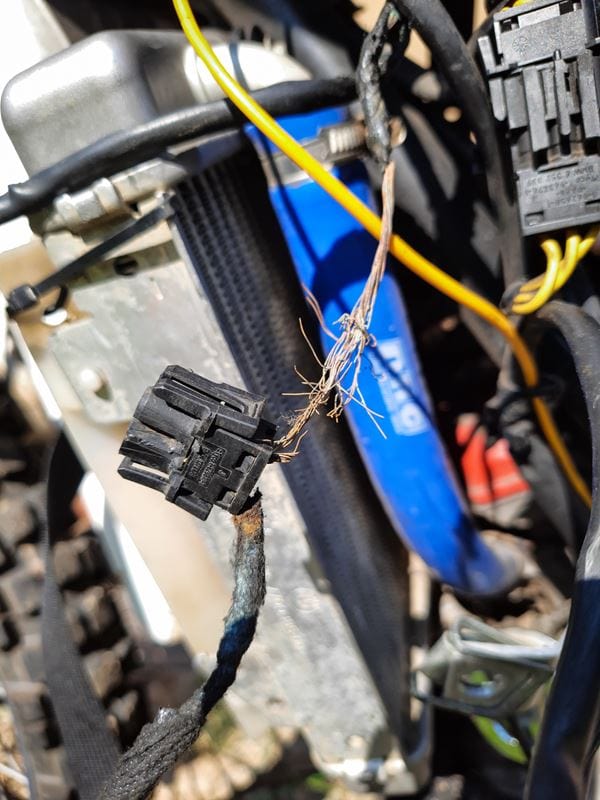 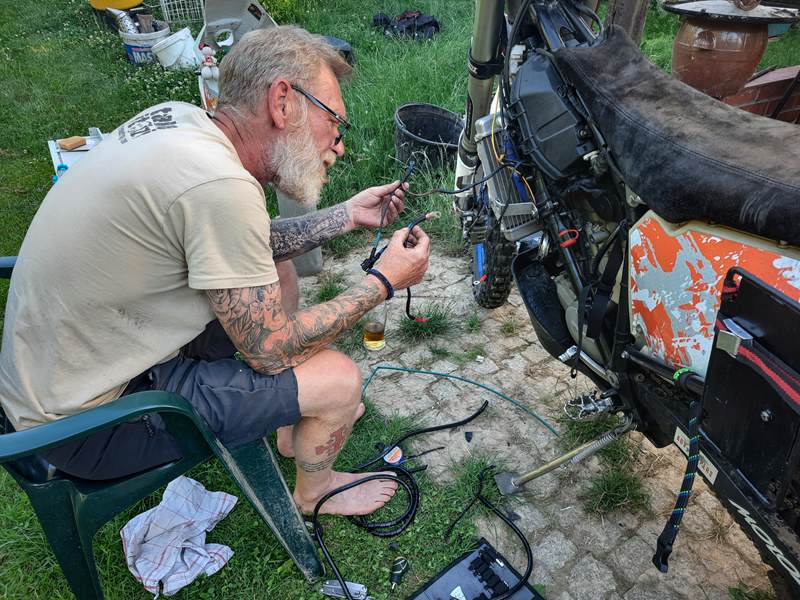 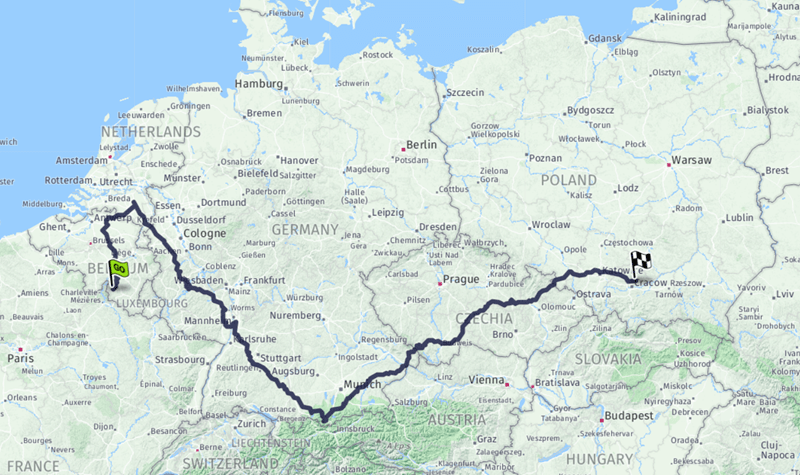 What is your plan? What next where and when finish?

We plan to go to Africa first, zig-zag down to South Africa, then go to Australia, then head to Asia, a little bit west towards the Middle East and then East again through the “Stans” and Russia. Then do North and South America and head back to Europe. Of course the plans can change as we go, so we need to be flexible. We plan the trip for the 5 years, but that can change, too. 🙂

Thanks for the “plan” looking forward for the next updates.

When you can't get enough of looking at one - it m

We got a package delivered today. Actually Joris g

What are your plans for ealry June? IZI Meeting is

We were in a desperate need for a "weekend out".